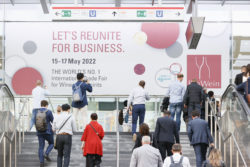 To the tune of 5,700 exhibitors from 62 countries
Over 38,000 trade visitors from 145 countries
Numerous business deals closed


ProWein 2022 has made an impressive comeback after the pandemic-induced compulsory break. The atmosphere in the 13 exhibition halls was extremely positive over the three days of the event, and it became more than evident: The in-person format with personal exchange, live tastings and a comprehensive programme of expert events is second to none. What’s more: boasting 5,700 exhibitors from 62 countries and over 38,000 trade visitors from 145 countries ProWein is the central industry event and the international business platform “par excellence”. “Due to the Covid peak in the 1st quarter of the year we had to postpone all our spring trade fairs to May and June and/or call them off completely, as was the case with boot,” explains Erhard Wienkamp, Managing Director at Messe Düsseldorf, and goes on to say: “At this juncture we would like to explicitly thank our exhibitors and visitors for endorsing the postponement to May and for backing ProWein! Obviously, their commitment has paid off – because there are numerous concluded business deals reported by exhibitors.”

ProWein’s special USP is its extremely broad international coverage on both the supply and demand sides. “ProWein is the only international trade fair that covers the complete world market. Correspondingly international are the visitors: two thirds of the  38,000 professionals from specialist retail, food retail and hospitality who travelled to ProWein to Düsseldorf, come from abroad,” underlines Michael Degen, Executive Director Messe Düsseldorf. Add to this the extremely high decision-making competence of visitors: also two thirds of the wine and spirits professionals attending are involved in the business deals in a decision-making capacity.

The relevance of the in-person format is also emphasised by the German Wine Institute as a conceptual sponsor: “After the 3-year absence the German exhibitors were happy to have personal conversations with their customers again. Their presentations naturally focused on the 2021 vintage white wines, which were received very well by both German and international wine experts thanks to their freshness and crispness,” explains Monika Reule, Managing Director at DWI, and adds: “Not least the new hall concept has contributed to more time and calmness for talks with customers and made for a very professional atmosphere overall. At the same time, the quality of international trade visitors, who hailed predominantly from the European region, was highly praised.”

VDP also gave a positive verdict: “After two years of pandemic there were fewer but very interested and above all selected, high-quality trade visitors at the trade fair so there was more room and more time for in-depth conversations. What remains in the end, however, is that despite a lot of change and the creativity required for new concepts, personal contact is irreplaceable and that the reunion of VDP vintners with international friends on German soil is centrestage,” says Theresa Olkus, Managing Director VDP,  summing it up.

The international origin of visitors is the most key criterion for Semper idem Underberg AG. Celebrating their 175-year anniversary this year they are driving global growth and have launched an international expansion programme with a focus on their global core markets. “ProWein is the ideal platform for pursuing our globalisation strategy. Düsseldorf’s global No. 1 trade fair for wines and spirits kicks off the international roll-out of our new corporate image while serving as a presentation platform for the latest developments in our brands Underberg, Asbach, PITÚ and XUXU,” explains Udo Bruns, Director International Business Semper Idem Underberg AG.

Les Grands Chais de France also underlines how important the international spread of visitors and decision-making competence is for them. “We are so delighted that things are finally getting going again after three years and ProWein is being held in Düsseldorf. We succeeded in reaching out to our customers – especially the buyers from Europe, the USA and Africa – and concluding good business deals,” says Anne-Laure Rayne-Helfrich, Marketing Executive Assistant at Les Grands Chais de France, taking stock and adds: “To us ProWein is also so relevant because we can reach our essential target groups here – in concrete terms specialist retail and importers and exporters.”

Also giving a positive verdict Miguel A. Torres, President and 4th generation of Familia Torres, said: “To us this year’s ProWein has presented a very high-quality level. The new hall concept has contributed to a more relaxed and yet very professional atmosphere overall. We also clearly noticed this during talks with our customers.”

This statement is also endorsed by Sandro Sartor, Managing Director EMEA at Constellation Brands, owner of more than 200 wine and spirits brands worldwide. “For our business this year’s ProWein has been very important. We managed to conclude concrete deals with customers from Europe, the USA and even Korea,” stresses Sandro Sartor, who is also Managing Director EMEA at the Ruffino Winery in Italy.

“We have realised two very successful premieres thereby injecting a breath of fresh air into ProWein: the Lounge “urban gastronomy@ProWein” and the Special Show “Caravanning & Wine”, a cooperation between ProWein and CARAVAN SALON,” explains Bastian Mingers, Project Director of ProWein. The hip hop-focused Lounge targeted food service providers and their service staff with a tailor-made programme. The five daily workshops with tastings and interviews were geared to the different levels of expertise of hospitality staff – from beginners to professionals. The trend theme wine tourism – for many vintners an important sales-promoting and image-building channel – was picked up by the Special Show ‘Caravanning & Wine’. At this Special Show visitors and/or vintners were able to learn about the fascination of mobile vacationing as well as the matching selection of vehicles for rent and accommodation at wine estates.

Other key facts at a glance:

The next ProWein will again return to its traditional March dates, from 19 to 21 March 2023, to be precise. Until then ProWein’s international spin-offs are running full speed ahead this year. Find all events at a glance here:

For current information on ProWein as well as visuals for post-fair coverage visit www.prowein.com.