“same but different”: the success story goes on 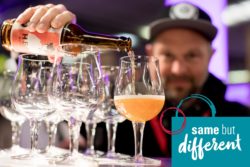 The international spirits and craft beer scene is as lively and diverse as ever: alcohol-free spirits, gin that changes colours when mixed, craft drinks from exotic lands or classics revisited – the spectrum of craft spirits, craft beer and cider is getting wider and more colourful year on year, while the creative, quality-conscious handling of natural resources plays a prominent role at the same time. The urban hospitality and bar business but also beverage and food retail benefit from this development. ProWein, the world’s biggest and most important trade fair for wines and spirits from 15 to 17 March 2020, provides a great stage for these themes with its trend show “same but different” – and this for the third year now. “Our exhibition hall 7.0 will once again become the epicentre of the international craft community. To the tune of 120 exhibitors from 24 countries will be presenting “hand-picked” spirits, beer and cider here,” explains Nicole Funke, Senior Project Manager ProWein. With some 400 suppliers the spirits segment has always played a pivotal role at ProWein. International brands as well as small, refined distilleries have been an important product segment for our trade visitors from retail and gastronomy for decades now. “The trend show “same but different” was the consistent step in the right direction with a view to covering the complete spectrum of spirit themes thereby also reaching out to new target groups. Here a trendy stage is set especially for small producers who can apply to showcase their ware here,” says Funke.

Celebrating premieres this year will be the “same but different” bar with a comprehensive programme and the “education school“. The education school, in particular, should meet with avid interest among ProWein trade visitors. Here several times a day international guest bar tenders will present current trends in the craft sector explaining the practical “to do’s” for spirits, beer and cider – so these “classrooms” therefore offer a perfect opportunity to explore this theme, especially for newcomers. At the central bar international bar tenders will dazzle visitors with their skills.

The by far biggest part of the Trend Show will come care of the spirits suppliers with about 90 exhibitors. The line-up of countries ranges from “A” for Australia to “U” for the USA. Asia is represented with China as is Latin America with Argentina, Mexico and Peru or Europe with a line-up of 18 countries. Low-alcohol and/or non-alcoholic beverages, so-called Low ABV drinks, are increasingly in demand. The non-alcoholic segment is gradually developing into a genuine “delicacy”. And even niche products – such as Aquavit, Vermouth, cereal-based liquor, Mezcal or cider – are gaining increasing exposure being offered in new twists. For a current overview of the “same but different” exhibitors go to https://www.prowein.de/de/same_but_different/same_but_different

Note for editors:
High-resolution visuals for ProWein can be found in our photo database under “Press Service” at www.prowein.de.