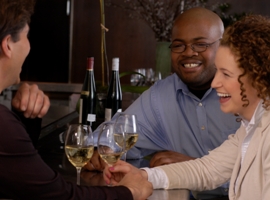 According to the German Wine Institute/Mainz, the value of wine exports from Germany increased by 13% in 2007, to 635 million Euro, and the average price per liter reached 2.03 Euro. Export volume increased by 8%, to 313 million liters. Monika Reule, managing director of the wine institute, released the latest figures in early March as part of preparations for the international wine trade fair ProWein in Düsseldorf (16-18 March 2008). All quantities mentioned, however, also include foreign wines re-exported by German commercial wineries.

Growth in the Middle Price Segment in Great Britain
With a volume of 80.5 million liters valued at 141 million Euro, shipments to Great Britain account for about one quarter of wines exported from Germany. There has been a continual change in the German wines on offer in the British market during the past few years, whereby the focus has shifted to wines in the middle price segment. This resulted in a slight decline in volume (2.4%) in 2007 compared with the year before, but a remarkable 10% increase in value.

Riesling Fuels Growth in the USA
Ongoing, increasing demand for Riesling in the USA helped German wine-growers achieve a 10% increase in value and 2% increase in volume in 2007. In terms of wine imports, Germany ranks seventh, with an import value of 142 million dollars, equal to triple the value of imports since 2002. In all, Germany exported some 30 million liters of wine – almost exclusively Riesling wines – to this dynamic and growing wine market. This is compounded by the noteworthy average price of 3.55 Euro per liter.

Increased Market Leadership in White Wine Segment in Norway
In terms of value, double-digit growth was also recorded in the important Dutch (+12%), Norwegian (+27%), and Swedish (+34%) markets in 2007. German exporters were able – once again – to increase their market lead in the white wine segment in Norway.