ProWine Shanghai 2022 – Respond positively to challenges for the best 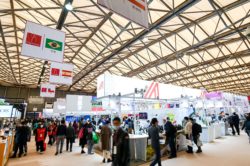 Active signing up by overseas and domestic enterprises with great confidence

Thanks to the outstanding performance of ProWine Shanghai despite the COVID-19 pandemic in 2021 and robust growth and diversified development of the Chinese wine market, a large number of overseas and domestic exhibitors have signed up and booked exhibition space for ProWine Shanghai 2022. Business France and ViniPortugal also greatly value the Chinese market and have confirmed their participation at ProWine Shanghai 2022. Meanwhile, Japan Sake and Shochu Makers Association and other overseas pavilions will be present at ProWine Shanghai 2022. The booth area of the Japanese pavilion is three times as large as that of last year. A host of well-known overseas independent exhibitors such as Grands Chais de France (GCF), Henkell Freixenet (Germany), and Decanter have signed up for the trade fair. One of the leading quota providers for Bordeaux futures, Baoyun Group, will also make its debut at the fair with more than 60 wineries for which it serves as an agent, including over 40 renowned boutique wineries from Burgundy.

The rise of Chinese wine regions has been a hot topic in recent years. An increasing number of people have noticed the charm and great potential of Chinese wines. This year, the Yinchuan Wine Industry Development Service Center and Yinchuan Wine Association, will introduce a variety of Chinese fine wines to ProWine Shanghai 2022. Both institutions have attended the exhibition for 3 consecutive years, enabling more people to experience the terroir at the east foothills of the Helan Mountain in Yinchuan, Ningxia, learn about the achievements of Yinchuan wine industry, and feel the charm and diversity of Ningxia wines. Also, the Penglai Coast Wine Region received positive feedback at the exhibition last year. Penglai Coast Wine Region will attend ProWine Shanghai again this year to let more people know about the terroir and beauty of Penglai coastal wines. UCW will also bring a number of Chinese wineries, including those in Helan Mountain's East Foothill Wine Region, showcase fine wines.

City promotion of ProWine Shanghai is in full swing

ProWine Shanghai will join hands with different wine region associations and companies to hold city promotion campaigns. Adhering to the strategic plan of “taking root in Shanghai and radiating China”, ProWine Shanghai has been expanding the market from multiple perspectives. In 2022, ProWine Shanghai continues cooperating with COFCO GREAT WALL to hold their 12-city promotion campaign, which was launched in February and is under progress. Besides, it worked with Wines of Argentina to launch the “Malbec World Day”, a theme promotion campaign, in over 20 cities from April. Next, ProWine Shanghai will join hands with Up-Chinese Wine (UCW), Yinchuan Wine Association, Wines of Chile, Wines of Germany, California Wine Institute as well as other domestic and foreign partners to hold more beneficial activities for win-win results. As of the end of June, promotion events had been held in more than 30 cities. With the purpose of promoting the exhibition in November it is estimated that the ProWine Shanghai team and its cooperation partners will cover another 25 different cities in China in the following weeks.

To penetrate new markets in 2022, ProWine Shanghai will organize the “ProWine Beijing Weekend” from August 26 to August 27, 2022 at the China World Hotel in Beijing. Nearly 100 boutique stands, over 10 forums/master classes/events, and about 1,000 ~ 1,200 professional visitors are expected to take part in the event. The launch of ProWine Beijing Weekend reflects that ProWine Shanghai is gradually focusing on the high demand wine markets in North, Northeast and Northwest China. For ProWine Shanghai the 10th edition, ProWine has developed more systematic, professional and targeted strategies for regional promotions to reach more regional buyers and invite them to attend ProWine Shanghai to create brilliance together.

ProWine will stick to wine education promotion regardless of numerous challenges

Wine education promotion are one of the highlights of ProWine Shanghai. The activities will be held at the exhibition site as scheduled. As the Chinese wine industry is gradually stepping out of the COVID-19 shadow, ProWine Shanghai will also roll out a wide-reaching wine education-focused promotion tour in many cities across the country. The organizer is committed to making a greater difference to the Chinese wine market and to providing more impressive and interesting wine courses.